At least once during the Christmas seasons of my 1940s childhood, my mother and I rode the elevated train from suburban Oak Park to downtown Chicago, exiting at the Marshall Field’s station. Pigeons strutted on the wooden platform and railings, flapping soft gray wings now and then, drawing my attention, but Mother pulled me toward a long flight of steps to the street, leaving the pigeons far above us.

We headed to a special, magical place, the big department store’s Christmas windows. Often, the wind and cold air stung our cheeks. Sometimes snowflakes floated lazily over us, but it didn’t matter. A crowd formed close to the windows of Marshall Field’s, and Mother and I wiggled into the center, moving closer and closer to the front until we stood before Christmas Window #1.

There, before us was a wonderland that brought ‘oohs’ and ‘ahs’ from the crowd. “Look, Mommy!” could be heard off and on as well when excited children pointed out the obvious to their mothers.

Marshall Fields initiated the Christmas window display in 1897. During November, the windows were covered with brown paper and not unveiled until the day after Thanksgiving. For weeks, designers and their staff worked long hours to create a story told in eleven successive windows, using a fairy tale or child’s book theme. Animation came in later years, and the designs grew more and more lifelike.  Piles of snow and frost-covered trees looked real enough to touch. A tray of gingerbread men near an oven so perfect, I could almost smell the spicy aroma. A scroll or some other unique prop told part of the story, and the rest came with our imagination.

The earlier windows were toy displays, a marketing scheme that drew thousands of shoppers. Later, in the mid-40s, the story windows began, and Uncle Mistletoe and Aunt Holly were introduced, becoming well-known to all Field’s shoppers. 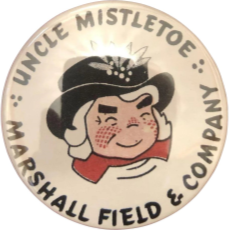 We moved from window to window enjoying the continuing tale. Stories like Snow White and Pinocchio came to life behind the giant windows. They were probably more exciting in the days prior to television, for we had nothing like this anywhere but the movie theaters. By the time we’d walked the entire route, our feet were tingling with the cold, and we headed into the store to warm up.

What better place to thaw out than in the line that ended with a short sit on Santa’s lap. By the time, we reached Santa, we’d shed gloves and hats and unbuttoned our heavy coats. I told Santa my dearest wishes, never doubting that he’d remember and bring at least one of the items I’d requested.

When the 1950s rolled around, I made the trip downtown to Marshall Field’s with my girlfriends. Even then, my excitement stayed at a high pitch. I noticed more details in the story windows, and my friends and I giggled and chatted, and pointed things out to one another. With rosy cheeks and numbing toes by the time we’d gotten to the end, we headed into the store. Not to see Santa but to savor a cup of hot chocolate, gaze at the giant Christmas tree in the atrium, and then spend some time wandering through the massive place looking for Christmas gifts for our family members. We might finish the day with a Frango Mint, the candy made famous by Marshall Field’s.

Today, Field’s is no more. The sign in front now says Macy’s. It was a sad day for me when that happened. A piece of my childhood crumbled, never to be the same. But the memory of the Christmas windows and my visits to Santa remain even many decades later.

We love living at Meadowlark Hills, as it has simplified our life significantly. We can close up the apartment and go to visit friends or family, or just leave on a trip and not worry about leaving...

Outgrown & Ready To Go: Pizazz Salon is set to open its doors June 1, with safety precautions