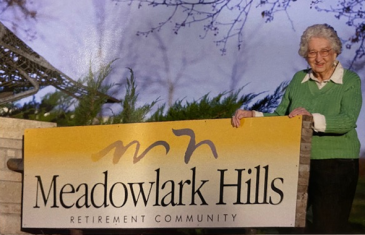 Meadowlark, a place people have called home since 1980, has a rich history. Margaret Wheat, a registered nurse, joined the Meadowlark board in 1976 and was an integral part of Meadowlark Hills for nearly half her life. In fact, it was Margaret who dreamed up what would become the official name of the community, following a multitude of suggestions that included Kanza Heights, Prairie View, and Hilltop House. Nothing quite fit … until inspiration struck her “like a beam of light” when she remembered the board’s first visit to the property.

“To look back at our starting point, when all the meadowlarks flew up out of the grasses—I could never have dreamed how it would all work out,” she said. “The community deserves appreciation and gratitude for the support and development of this organization.”

Margaret served a second board term from 1998 to 2005 and became a Meadowlark Hills resident herself in 2000, first moving with her husband, John, into a new cottage, and later into an apartment after his passing.

In 2012, Margaret was honored with the Legacy Award for her contributions to Meadowlark. In 2015, Meadowlark Foundation established the Margaret Wheat Spirit of Meadowlark Hills Award, which honors a resident who embodies the spirit and person-centered culture of Meadowlark Hills. Margaret passed away in October 2019.

In 2014, Margaret reflected on Meadowlark’s first 30 years. What follows is an excerpt from her essay titled, “Meadowlarks at Home on the Hills.” Please contact Sarah Duggan at (785) 323-3878 for access to the full copy of her writing.

The old adage, “Necessity is the mother of invention,” can be interpreted as a recognized need can become the motivation to fulfill the need.

In Manhattan in the 1960s and 70s, its maturing population recognized the need to create a retirement community in which the older citizens could live, where problems of aging could be addressed and assistance given by geriatric and health professionals.

Downsizing could be accomplished, while a home could be established among friends, and dignified living could be achieved at a slower pace, with activities that filled the social needs of the later years of life. Several unsuccessful attempts had been made to achieve this goal.

A motivator would be a primary requirement to succeed in attaining this goal, and such a person materialized this motivation is Marshall Schirer, the pastor of First Baptist Church in Manhattan. After only a few years in Manhattan, he saw several couples who had been actively involved in the life of their church, and who, because of the lack of retirement facilities in Manhattan, had moved to such places as Kansas City and Wichita. By 1974, he had gone before the Ministerial Alliance of the city, and challenged them to work together in planning, supporting, and leading the city in a cooperative effort to raise funds to create a retirement community for its citizens.

Of course, a vision of such utter grandiose hope and desire was not for the faint-hearted. The evidence of numerous nursing homes and retirement centers across the nation which were in financial difficulties was discouraging, and the idea as a group activity was turned down by the Ministerial Alliance. Yet the need became rooted. To attempt to meet his need required the following: go on record as supporting the efforts of those seeking to provide retirement facilities; church membership roles will be made available and members can be approached to consider financial commitment; the church will appoint an official representative who is a member of the church.

The church passed this motion, and Vernon Larson and Evans Roth were elected by the church to its representatives on the Retirement Committee Board.

The Board, once organized, was faced with a daunting task—from ground zero to find the funds and land on which to build a retirement community. Retired citizens were eager to see planning underway and were ready to commit funds toward reserving a place for themselves in the community to be built—it was an exhibition of faith and trust in a future hoped for, yet unseen. To begin the process, on March 3, 1975, The Articles of Incorporation of the Manhattan Retirement Foundation, Inc. were applied for and granted by the Secretary of State of Kansas.

In November 1976, plans were laid for applying for zoning and annexation to the city, plans that would meet the newly revised zoning regulations. The treasurer reported $12,526.72 on hand, money that had been given to the organization by churches and individuals. Tom Wentz was asked to begin negotiation for an employee who would serve as coordinator of the building activities and future sales of living units. The Service Committee gave a written report on their trips to other retirement and nursing communities, which included ideas on housekeeping, maintenance, laundry, healthcare services, food, apartment units, and recreational space.

The Service Committee also reported their discussion of a name for the future retirement community, and presented the name Meadowlark Hills as their suggestion. This met the approval of the entire Board, and thus the meadowlarks of the grasses would eventually be joined in song by Manhattan retirees.

We have met new people who have had diverse backgrounds and have found them to be new friends which we can share our experiences with.

Back to the Beginning