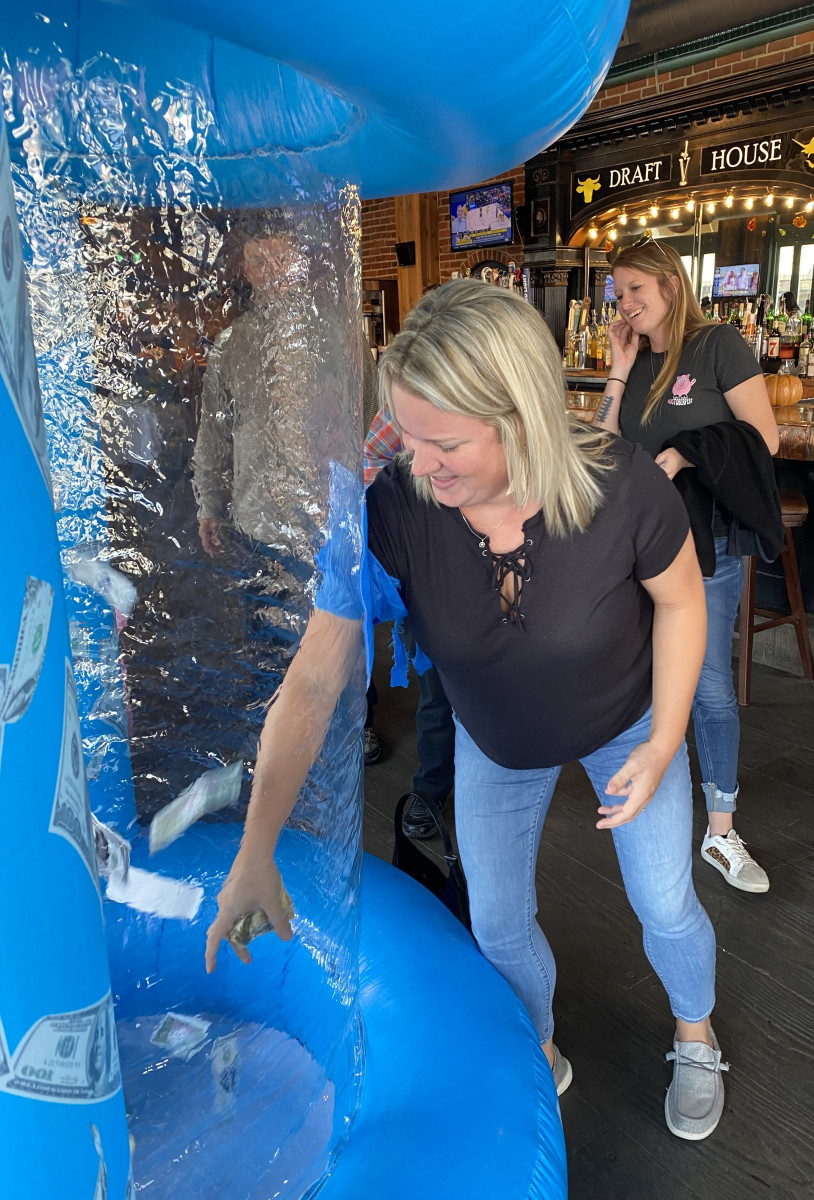 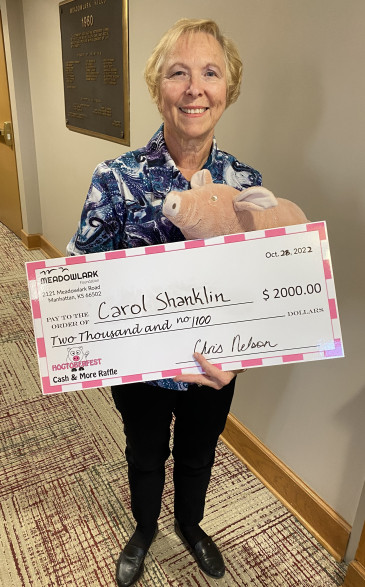 The call Carol Shanklin received last Friday afternoon was a first for her. A ticket with Shanklin’s name on it was the first one drawn in this year’s Cash & More Raffle, meaning she won a squeal-worthy $2000! Posing a few hours later with a big check and Happy, our pink HOGtoberfest mascot, Carol was all smiles and said “I have never won any sort of drawing before!”

The Cash & More Raffle was a component of the 9th annual HOGtoberfest, which benefits the Good Samaritan Fund. Shanklin was one of the first to purchase tickets, buying them at the September Meadowlark Market after completing her volunteer shift. In fact, Shanklin ticks several Meadowlark boxes, as she and her husband, Larry, are Passport members, she is a former Board of Trustees member, and she is a frequent, enthusiastic volunteer at Meadowlark events. Shanklin has opted to donate half of her prize to the Good Samaritan Fund, noting the worthiness of the fund’s purpose.

Congratulations to Shanklin, and these three additional winners:

More than 1300 tickets were sold at $5 each. This revenue, as well as event sponsor fees, donations, and 10% of the day’s sales at Kite’s Aggieville Draft House will combine to support the Good Samaritan Fund. Not all of the numbers are known, but with nearly all of the expenses recorded, the celebration is on track to boost the Fund by more than $10,000.

Pulled pork is the traditional star of this FOOD, FRIENDS, and FUNdraising event, and diners throughout Meadowlark and at Draft House enjoyed tender, juicy bites of “the other white meat” at lunch and/or dinner. The centerpiece of the evening buffet was a whole hog that had been slow-roasted for hours, and several attendees heaped compliments on the cookin’ Cox brothers, Bud and Bobby.

Central National Bank, a new Prime sponsor, added to the FUN last Thursday at Draft House by setting up their inflatable Cash Cube. Event-goers were able to reach into the cube to grab as much blowing cash and coupons as they could in 20 seconds. Bank staff also brought a piggie bank filled with coins and a little cash, inviting diners to guess the money total inside the bank. The person with the closest guess and winner of the bank and its contents was former Meadowlark finance team member Chuck Henry, who retired a few years ago.

Meadowlark Foundation appreciates the FRIENDS who contributed to event’s success. If YOU purchased or served food, bought or sold raffle tickets, made a donation, and/or were one of 12 HOGtoberfest volunteers, thank you for supporting the Good Samaritan Fund! This fund assists residents in a Meadowlark healthcare household who have depleted their financial resources. About 52% of healthcare residents benefit from the fund, continuing to receive Meadowlark’s high-quality care and service.

Back to the Beginning