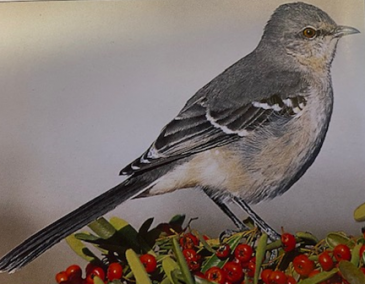 If human assumption is correct, one of the birds that blesses our lives (but seen here only infrequently) is totally unaware that its name and one of its primary personality traits were immortalized in the 1960 Pulitzer prize-winning novel, To Kill a Mockingbird, by Harper Lee, and in a critically-acclaimed 1962 film of the same name.

In the story line, eight-year-old Scout is the young tomboy daughter of Atticus Finch, a local lawyer defending a disabled black man innocent of the charge of rape brought against him. Scout is teased and mocked for not fitting the role of femininity thought proper by townspeople and some family members. In her way, Scout mocks and diffuses a local mob intent on lynching the accused. Later, in trial, a local poor white man, father of the supposed victim, is shown by attorney Finch to be a liar. The man wants revenge and hopes to get it by trying to kill Scout and her older brother, Jem. This man’s dark-of-night plan is foiled; he is killed by Scout’s neighbor, a mentally challenged, but protective man with whom Scout and Jem have been trying to cultivate some sort of relationship.

But what of the bird behind all of this? The northern mockingbird can be found year-round all through the American south and deep into Mexico—up to an altitude of about 5,000 feet. It occurs as far north as Kansas, but our part of the state is the far northern reach of its range. Thus, it appears here only during warm weather.

The mockingbird’s size and shape is that of a thin robin. Its color is gray above and whitish below, and the coloration is the same in both sexes. It has small white patches on the lower edge of the folded wing. The most conspicuous mark shows in flight:  large, bold white patches on both top and underside of wings. Wings are relatively short and rounded. These patches flash in flight.

These birds feed both on the ground and in foliage, eating a wide variety of small animals and wild fruits and berries. Mockingbirds prefer open areas such as parks and gardens and dense shrubs. The nest is built in shrubs, vine tangles, cactus or tree, 3-10 feet above ground. The female lays 2-6 blue-green eggs that have brown marks. Although the following numbers are not unusual for small birds, mockingbird eggs hatch after 12-13 days of incubation, and the chicks fledge after 10-13 more days. How about less than a month from fresh eggs to chicks at the stage where they can leave the nest and follow their parents!

And it is a very vocal and aggressive bird. As do our cardinals (and other closely related species), mockingbirds mimic many other birds, and each version is repeated three times before the bird goes on to mimic the sound of another creature. And they often sing at night. The mockingbird’s scientific name, Mimus polyglottus, is well chosen. The generic name, Mimus, refers to mimic, and the specific name, polyglottus, in Latin, means many tongued. One authority claims that the mockingbird’s mimicry of other sounds is so precise—so exactly copied—that an electronic analysis cannot detect any difference from the original!

Mockingbirds also form territories of 1-2 acres twice during the year. In spring, the male sings and defends a breeding territory against most all other animals, including other mockingbirds and even snakes. Perhaps these birds instinctively know that many snakes love bird eggs and chicks. In fall, both males and females sing and defend a feeding territory centered around a good source of berries.

I better stop. To continue along this line would make that bird begin to sound almost human.

We love living at Meadowlark Hills, as it has simplified our life significantly. We can close up the apartment and go to visit friends or family, or just leave on a trip and not worry about leaving...