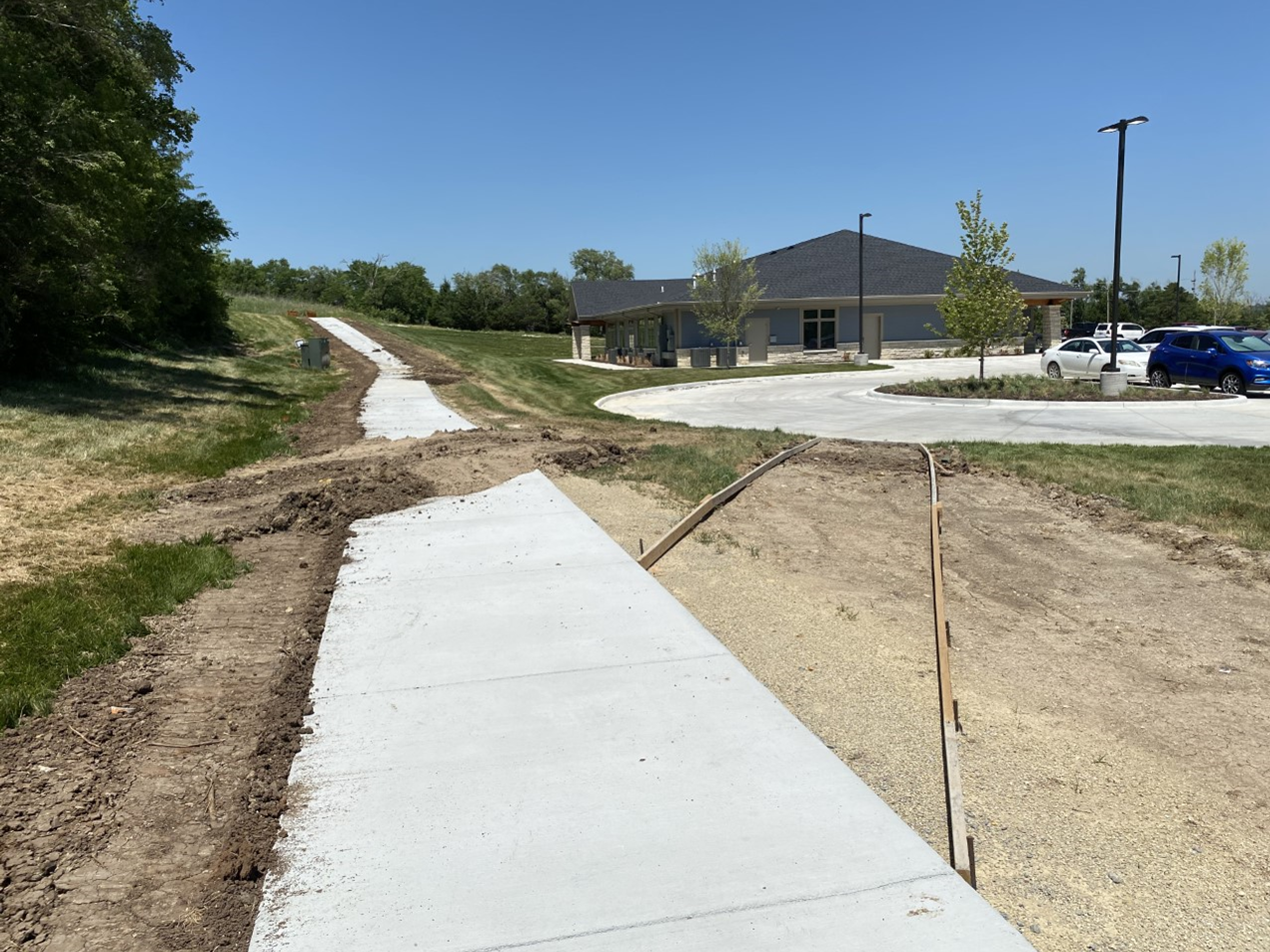 After years of mostly foot traffic created by two- and four-legged mammals, the ground east of Meadowlark Valley has been altered beginning last fall by the wheels of progress. The CenterPointe Physicians Building opened last December, the Community Garden and a new shed appeared this spring, and a two weeks ago, the first concrete was poured on the southeast section of Meadowlark’s Loop Trail. A curving paved pathway now extends from the Valley cul-de-sac to the wooden bridge north of the doctors’ offices.

These yards of concrete surface placement are the first evidence of a successful Paving the Way fundraising campaign, which was announced in January after Jan Fink Call and Jeff Call of Huntingdon Valley, Pa., and Jan’s brother, Dan Fink of Highlands Ranch, Colo., pledged to match, dollar for dollar, up to $40,000 in memory of the Rev. Wayne Fink, who was minister at one of Meadowlark’s founding churches as plans for the retirement community were being considered. Generous donors more than matched the siblings’ contributions, donating nearly $94,000.

Shane Theel, a BHS Construction project manager, discourages residents from visiting the area during the day while the crew is working, but take an extremely cautious peek in the evening, and one will notice a new sidewalk connecting cottages 1203 and 1207 to the garden and a walkway to the garden’s north gate.

“I would discourage tourists during working hours anywhere on the trail as there are men working with equipment, and they aren’t expecting pedestrian traffic,” Theel said.  “After hours would be better, although there will be tripping hazards in abundance with concrete forms, braces, nails and screws possibly pointing up or out, and uneven walking surfaces. Once we get backfilled and cleaned up, things are fine for traffic.”

He added that concrete hardens within a few hours and takes 28 days to reach its full strength.

In addition and weather permitting, the BHS workers plan to this week pave the trail along the east edge of the garden, continuing southwest toward what “we are calling the trail cul-de-sac, which is right before the woodsy trail starts,” Theel said.

A popular suggested addition to the project is a walkway from the trail to the CenterPointe parking lot, allowing patients to more easily and safely reach the building on foot or by golf cart. Theel said he expects that section to be poured this week.

With soil tamped down along the edge of the concrete, the area is ready for grass seeding at the appropriate time.

Theel said the surface prep work east of the new bridge to the cemetery is lagging because of the recent storms, but the company’s goal is to complete that part of the project by the end of the month.

With this Goldstein grant and $50,000 in matching dollars, Meadowlark could continue the enhancements to another trail section, such as Donner’s Way, which winds through the wooded area south of Meadowlark Valley. Donations of any amount are welcome toward this matching opportunity. If you have questions or would like to join the individuals and family foundations who’ve generously supported our trail project, please contact Becky Fitzgerald at (785) 323-3843.

For me, we’re a family. Meadowlark Hills is home.