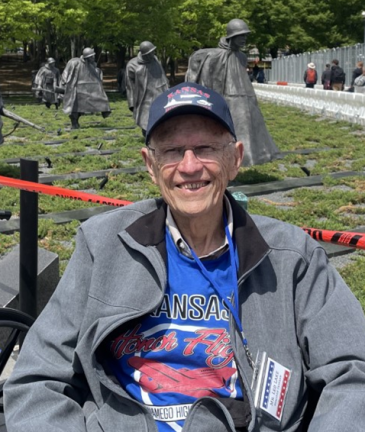 An offer of a lifetime came to me to participate in an Honor Flight for veterans. Last fall, the Wamego School district presented a program here at Meadowlark about their Honor Flights. At that time I expressed an interest, and in early April I received confirmation that I was welcome as a part of the spring flight.

At an orientation two weeks prior to the event, we met our “guardians.” The guardians are all members of the High School honor society but were required to write an essay explaining a bit about their philosophy and why they were choosing to take the task of a “guardian.” The guardian’s role was to make our journey as enjoyable as possible. A job which they all did with such compassion.

Late the evening of Tuesday, April 26, the journey began. Two veterans from Korea and 23 Vietnam veterans arrived at Wamego High School. Prior to boarding the bus, we were given a homemade breakfast. At 12:30 a.m. the bus headed east where we would be on a Southwest flight to Baltimore. After a very quick security check, the gang was met by retired veterans who led our way through the airport to our adventures by bus. The crowd of waiting people was surprising as everyone stopped, clapped, cheered, and wished us well.

The entire trip revolved around seeing the various memorials. (In case you see pictures of me on some media in a wheelchair, I will explain that I am fine, but being the second oldest veteran, the director suggested I take advantage of the chair.) The first stop was at the World War II Memorial. My guardian and I traversed every part of that large memorial and a series of pictures were taken by individuals, as well as a group picture. From there that day we traveled to the Korean Memorial, Lincoln Memorial, and Vietnam Memorial. The Korean Memorial is being enlarged, but we were able to see the plans and partial construction. A quick trip to a nice restaurant for our evening meal and an interesting evening of surprises, which I will not discuss to avoid spoiling the surprise for anyone going this fall.

A few hours rest was welcome at the Hyatt in Arlington, Va. Following breakfast on the second morning, we were on our way to se the Navy and Marines Iwo Jima Memorial. The next stop was at the tomb of the Unknown Soldier to spend time watching the very impressive changing of the guard.

Next came a tour of the National Archives to see firsthand the Charters of Freedom—the Declaration of Independence, U.S. Constitution, and U.S. Bill of Rights. Also included was a room explaining how technology is affecting the work of the archives. We were given total freedom to wander through this area viewing those items of interest to us.

From there we made a stop at the Eisenhower Memorial. Because we were running slightly behind schedule, they asked the students to depart the bus and go to the memorial and take pictures. Having been a resident of Abilene for 21 years, I requested permission to get off the bus and get a better view of the memorial.

At noon of Day Two,  we had lunch in Washington D.C. and headed for Reagan National where we would fly back to Kansas City. After a warm welcome at the airport, we found ourselves back on a bus for the last leg of the trip. At Topeka, we were greeted by a highway patrolman from Wamego, who led us toward our final destination. As we exited I-70 to Highway 99, we were escorted by several motorcycles with flashing lights taking us down Wamego’s main street, which was lined with people. Back to the high school and we were seated thinking we were to be introduced by our “guardian.” The surprise for us then was the presentation of a Quilt of Valor for each veteran. The quilts were all handmade by ladies from two quilting groups in Wamego.

In closing, I would like to thank my wonderful guardian, Caroline, and the great leaders from Wamego High School, the doctors who traveled with us, the photographer who will provide us with many photos, and finally the entire Wamego community who raises the funds to provide this opportunity two times a year. The funds covered the expenses of 56 persons on the trip. The community topped it off with a warm greeting by hundreds of friends on the streets and in the high school upon our return. I was blessed to also have my son and daughter, their spouses, and a granddaughter to meet me. Any veteran who has not had this opportunity, apply immediately for the next trip. Wamego is one of three high schools in the nation allowed to be a sponsor and provide guardians, and they do it right!

The principal reason we live at Meadowlark Hills is that they are accredited in management of Parkinson's disease. Don has PD and various therapies address the many symptoms. We credit them with...

Fiesta to Remember: Tastes & Tunes for a Reason