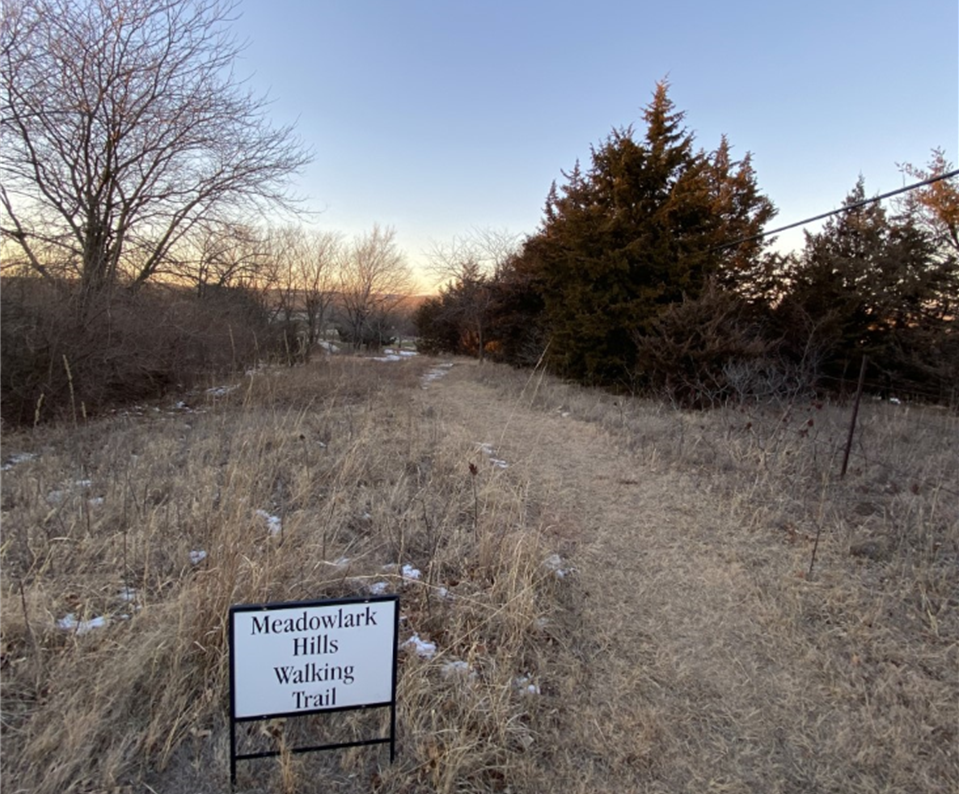 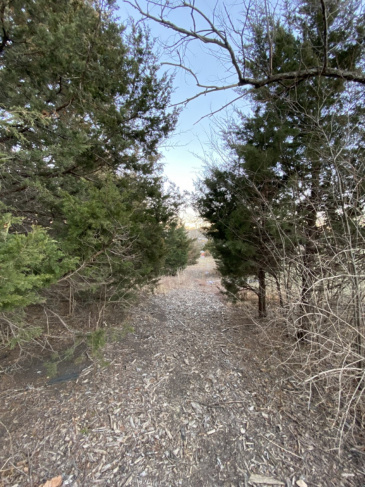 Prompted by a pledge of matching/challenge funds, Meadowlark Foundation announces the “Paving the Way” campaign. Jan Fink Call and Jeff Call of Huntingdon Valley, Pa., and Dan Fink of Highlands Ranch, Colo., have pledged to match, dollar for dollar, up to $40,000 in memory of the late Rev. H. Wayne Fink, to pave a portion of the loop trail which circles Meadowlark’s campus. The section next proposed to receive a hard surface stretches from Stillman Cemetery, located east of Meadowlark Circle, to near the new CenterPointe Physicians building, located east of the Meadowlark Valley road.
"Our dad loved to be outside; he appreciated nature and the value of fresh air,” Jan Fink Call said recently. “This project appealed to my brother and me because the trail is used by many now, and improving it will provide even greater access to the outdoors for current residents and guests as well as those in the future.”
Persons walking the aforementioned section of trail currently step on a variety of surfaces: mowed grass, mulch, and soggy soil after the recent snows. Trail-users also traverse a new wooden bridge installed this fall to span a rock-lined drainage ditch created to control water flow northeast of the physicians’ office.
A successful “Paving the Way” campaign, $80,000, allows for a 1,550-foot long, 6-foot wide ribbon of concrete that will improve accessibility. An additional $12,000 also would cover improvements made this fall, such as dirt work and a rock base just west of the new bridge. A wide, hard-surface trail more easily accommodates persons walking side-by-side, or those using an assistive device, such as a walker, wheelchair, or mobility scooter.
Rides in a golf cart have been offered to persons who’d like to visit Bayer Pond Nature Area, so paving more of the trail lengthens or varies the route taken in a golf cart or on a motorized wheelchair or scooter. A hard-surface trail also is more inviting than soft ground when temperatures warm after rain or snow.
From being part of the process in the late 1970s to open Meadowlark’s doors to living in a healthcare household decades later, one might say Rev. Fink came full circle in his relationship with Meadowlark. It’s fitting that a donation in his memory builds on the efforts of previous Meadowlark trail blazers who helped exercise and nature enthusiasts more safely walk Meadowlark’s “full circle.” Rev. Fink was pastor from 1976 until 1985 at Manhattan’s First Baptist Church, where he continued First Baptist’s efforts with five other local churches to create Meadowlark Hills. After Meadowlark opened in 1980, Fink led worship services and Bible studies and met with residents for pastoral care.
Before and after his years at First Baptist, his service to churches also included others in Kansas, as well as churches in Michigan, Pennsylvania, and Colorado before he retired and returned to Manhattan in 1998 with his wife, Beverly. (She died in June 2021.)
In 2009, Fink was a guest for rehabilitation at Meadowlark’s Bramlage House, and from 2010 until his death in 2013, he lived at Wroten House.
“He had incredible care, and Meadowlark meant a lot to him,” Call added. “He was part of the beginnings of the community and then it became a benefit to him personally.”
This gift is the third such tribute Meadowlark has received to increase accessibility along the loop trail. Manhattan resident C. Clyde Jones made a donation in 2016 in memory of his late wife, Margaret “Midge” Jones, to help pave the trail leading to and around Meadowlark’s Bayer Pond Nature Area. The Goldstein Fund and Shilling Construction also made donations toward that project.
In 2018, Bea Rasmussen surprised her husband, Don, by contributing toward trail improvements south of Meadowlark Valley. That portion of the trail, winding east from Meadowlark Road through the woods near Kimball Avenue, was named “Donner’s Way” to recognize Don’s many hours of effort to create a continuous loop around Meadowlark’s 55 acres.
If you’d like to join the Fink siblings and Jan’s husband, Jeff Call, in “Paving the Way,” click the Donate Now button on the home page at www.meadowlark.org, or write a check to Meadowlark Foundation with “Paving the Way” in the memo line. Contributions are tax-deductible.
Questions? Please contact Becky Fitzgerald at (785) 323-3843.