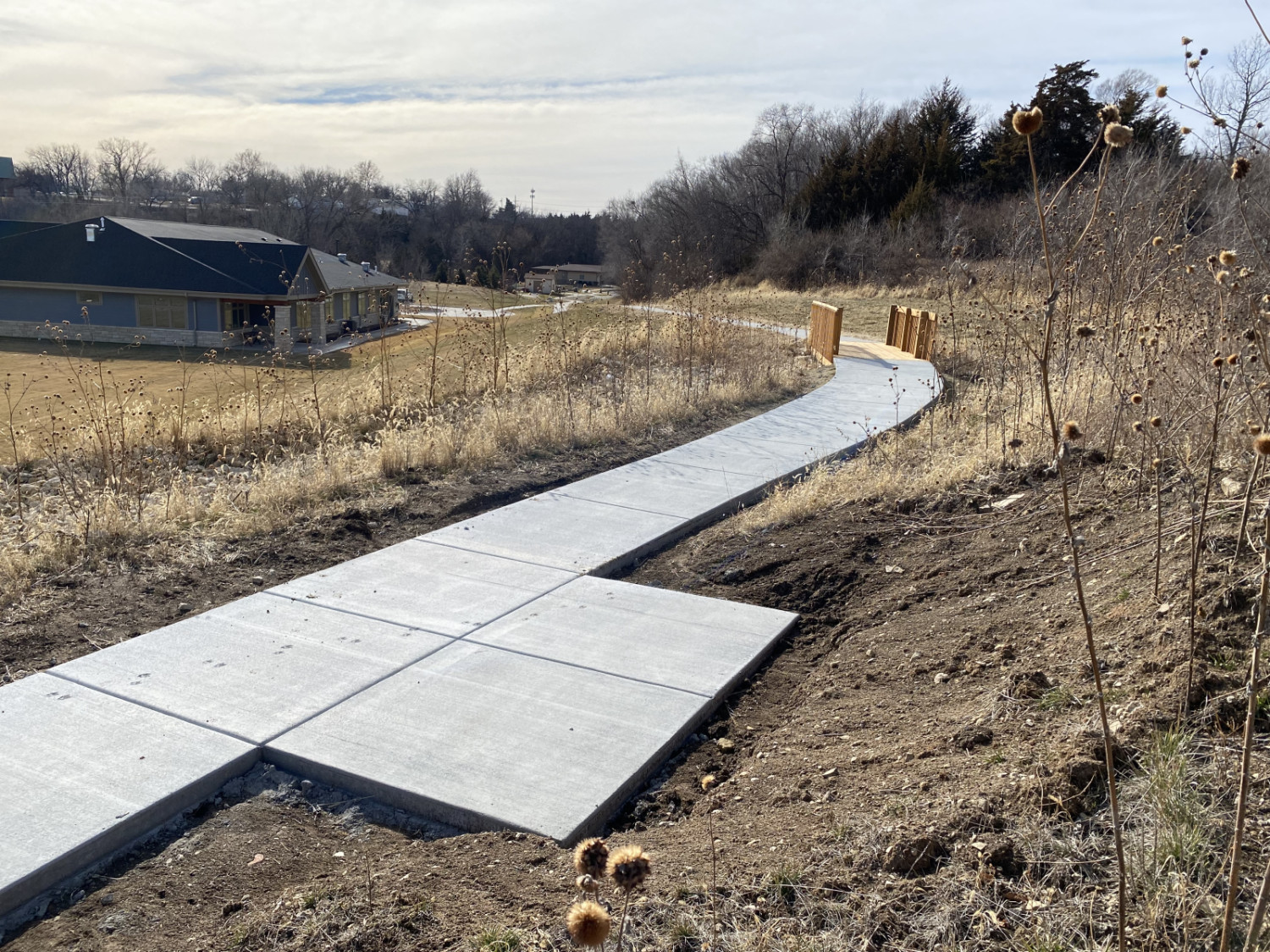 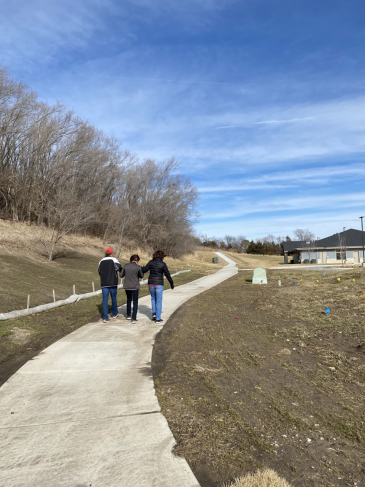 If these warmer days in January have enticed residents or visitors to stretch their legs on Meadowlark’s campus, they may have been pleasantly surprised to find another smooth, hard, even surface on which to tread. A successful Paving the Way campaign, launched about this time last year to provide funds to enhance a portion of Meadowlark’s loop trail, has allowed for 6-foot wide ribbons of concrete in more areas than originally planned. Go on … walk on the wild side!

Shane Theel, a BHS Construction project manager, reports that concrete was poured last month on the last trail section planned to be paved with 2022 campaign funds – from Stillman Cemetery south to the bridge near the CenterPointe Physicians building. The finishing tasks of backfilling along the pathway edges and seeding the new soil with grass will take place “in the near future,” Theel said.

Future Monarch resident Kay Schwartzkopf, her son, Grant Shellenberger, and daughter-in-law, Jennifer, on Tuesday enjoyed the 53-degree temperature as they walked a portion of the loop trail prior to lunch at Prairie Star. Grant joked that they tackled the “expert” section – the up and down, unpaved path through the woods along Kimball Avenue known as Donner’s Way – before taking the winding climb to the cemetery on the new pavement.

Along the way, they spotted new paved walkways separating the Community Garden plots, a few concrete rectangles adjacent to the garden and the trail, where tribute benches may be placed, as well as a paved walkway linking a Meadowlark neighborhood to the new trail. This walkway was poured between the cottages at 1120 and 1200 Meadowlark Circle.

Paving the Way was announced last January when Jan Fink Call and Jeff Call of Huntingdon Valley, Pa., and Dan Fink of Highlands Ranch, Colo., pledged to match, dollar for dollar, up to $40,000 in memory of the late Rev. H. Wayne Fink, to pave a portion of the loop trail which circles Meadowlark’s campus.

“Our dad loved to be outside; he appreciated nature and the value of fresh air,” Jan Fink Call said at the time. “This project appealed to my brother and me because the trail is used by many now, and improving it will provide even greater access to the outdoors for current residents and guests as well as those in the future.”

Persons who previously walked from the cemetery to Meadowlark Valley road encountered a variety of surfaces: mowed grass, mulch, and soggy, uneven soil after rain or snows.

A successful “Paving the Way” campaign, $80,000, would provide 1,550 feet of concrete. An additional $12,000 would cover improvements made in the fall of 2021: a wooden bridge spanning a rock-lined drainage ditch created to control water flow northeast of the physicians’ office and dirt work and a rock base just west of that bridge.

Kay Schwarzkopf noted that a wide, hard-surface trail more easily accommodates persons walking together, or those using an assistive device, such as a walker, wheelchair, or mobility scooter. Indeed, she and her family walked hand-in-hand and side-by-side as they approached the bridge.

Meadowlark Foundation is pleased to announce that the announced campaign goal of $92,000 was surpassed. A total of $133,509 has been contributed, to date, by 55 individuals/couples, businesses, or charitable foundations, allowing the work to expand.

Additions to the project include a paved walkway from the east end of Donner’s Way to Meadowlark Valley, and the previously described bench sites and the connection from Meadowlark Circle to the trail, as well as three tribute benches.

Meadowlark Foundation greatly appreciates this support and investment in our community.

The principal reason we live at Meadowlark Hills is that they are accredited in management of Parkinson's disease. Don has PD and various therapies address the many symptoms. We credit them with...

An Evening with Gary LaGrange