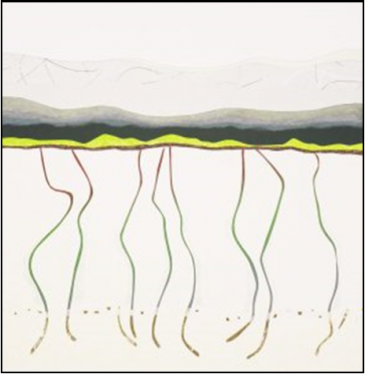 Meadowlark’s collection of Friends of Art gift prints grew recently thanks, in part, to some detective work by Alyn West, gallerist at Manhattan’s Strecker Nelson West Gallery. Prior to last week, the collection, which hangs in the Stamey Gallery in the hallway between the KSU Classroom and Verna Belle’s Cafe , needed five prints to be complete. Now, only two prints remain to be discovered.

The Beach Museum of Art donated the 2018 gift print, Dancing on the Table, a lithograph with gold leaf and hand drawing by Lynn Benson. Two decades-old prints, one from 1964 and one from 1969, were found in Kansas and brought to Meadowlark’s attention.

“I love a good mystery, so I started seeking out the missing gift prints. What could I find? I dove deep into the Beach Museum’s website, and I touched base with the curator and also with Jay and Barbara Nelson (former owners of the local art gallery),” Alyn West said. “I thought it best to compile my own list based on what I had learned. In the process, I became very familiar with all the prints.”

K-State’s Marianna Kistler Beach Museum of Art owns the entire gift print collection, but Stamey Gallery at Meadowlark Hills may be the only location where most all of the prints are on display every day.

In 1934, Friends of Art began the annual practice of inviting a regional artist to prepare an original work with a limited number of signed prints. In addition to helping to finance the purchase of works for K-State’s art collection, the gift prints promote Kansas and regional artists. Each donor to the Friends Fund received that year’s gift print. Except for the World War II years and some years in the 1970s, the tradition has continued to the present.

West discovered that William Dickerson’s Cottonwood Grove was at a gallery in Wichita. She offered to speak to the gallery owner and pick up the print while in Wichita on other business.       Sailboats, a screen print on paper by Alex Boyle, caught West’s eye as she was with an older client, looking through pieces in his collection. “I knew Meadowlark was interested, so I brought that piece back to the gallery,” West recalled.

Now, as far as Meadowlark’s Art Committee knows, the only two prints needed to complete the collection are New England Farm, a lithograph created by Thomas Hart Benton in 1951, and a 1963 untitled work by Rex E. Hall. “I have hopes the Thomas Hart Benton will come on the market, and I have contacted the Benton estate through one of the artists we represent, who is Benton’s grandson,” West said. She added that Rex Hall’s untitled abstract print is proving to be elusive, but fortunately, she also has contacts with his family and is optimistic they may have an artist’s proof of it. “I’ll keep on this challenge until I have found them all!”

Meadowlark’s gift print gallery was named for Rae and Bill Stamey because of their donation of several gift prints to Meadowlark after moving to a 3rd floor apartment in 2008. Rae said they attended their first Friends of Art dinner and purchased their first gift print in the early 1950s when Bill was a new faculty member at Kansas State. They continued that tradition for several years. These new editions are currently on display on the temporary art wall in the Community Center across from the Game Room.