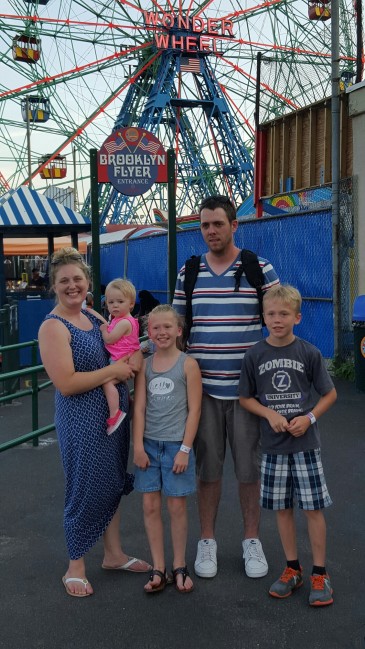 Fuhgeddaboudit – From the Big Apple to the Little Apple

Hey! from the Big Apple – the Duggans have found themselves in Brooklyn, New York where we are spending precious time with Murphy’s Pop and Grandma. We’ve visited Coney Island, the American Museum of Natural History, Times Square and the Central Park Zoo. I have visited NYC a couple of times, once before I met my husband and twice since, and still cannot wrap my mind around how big the city really is. I could get to Kansas City from Manhattan, Kansas in the time it takes to grab a cab in Brooklyn to the train station, ride the train into the city then walk to my destination at times. Mind boggling for a born-and-raised-small-town-Kansas girl.

When meeting new family and friends in New York City, people often get a kick out of the fact that we live in Manhattan, Kansas and find it even more entertaining that our Manhattan is lovingly referred to as the Little Apple. Then I wonder, how did Manhattan come to be known as the Little Apple?

It all began with a steamboat, the Hartford. The Cincinnati and Kansas Land Company left Cincinnati and headed for central Kansas on the steamboat on April 27, 1855. Their plan was to head west along the Ohio, Mississippi, Missouri and Kansas rivers. This led to the founding a new community in the Kansas Territory.

The Hartford was grounded by sandbars near our present-day Manhattan where a new town called Boston was beginning. The founders of Boston liked the new arrivals and convinced them to stay. Investors from New York in the land company pushed for an unoriginal name – Manhattan – to call the new community. The town was then re-named Manhattan.

Thanks for stopping by – see you next week!